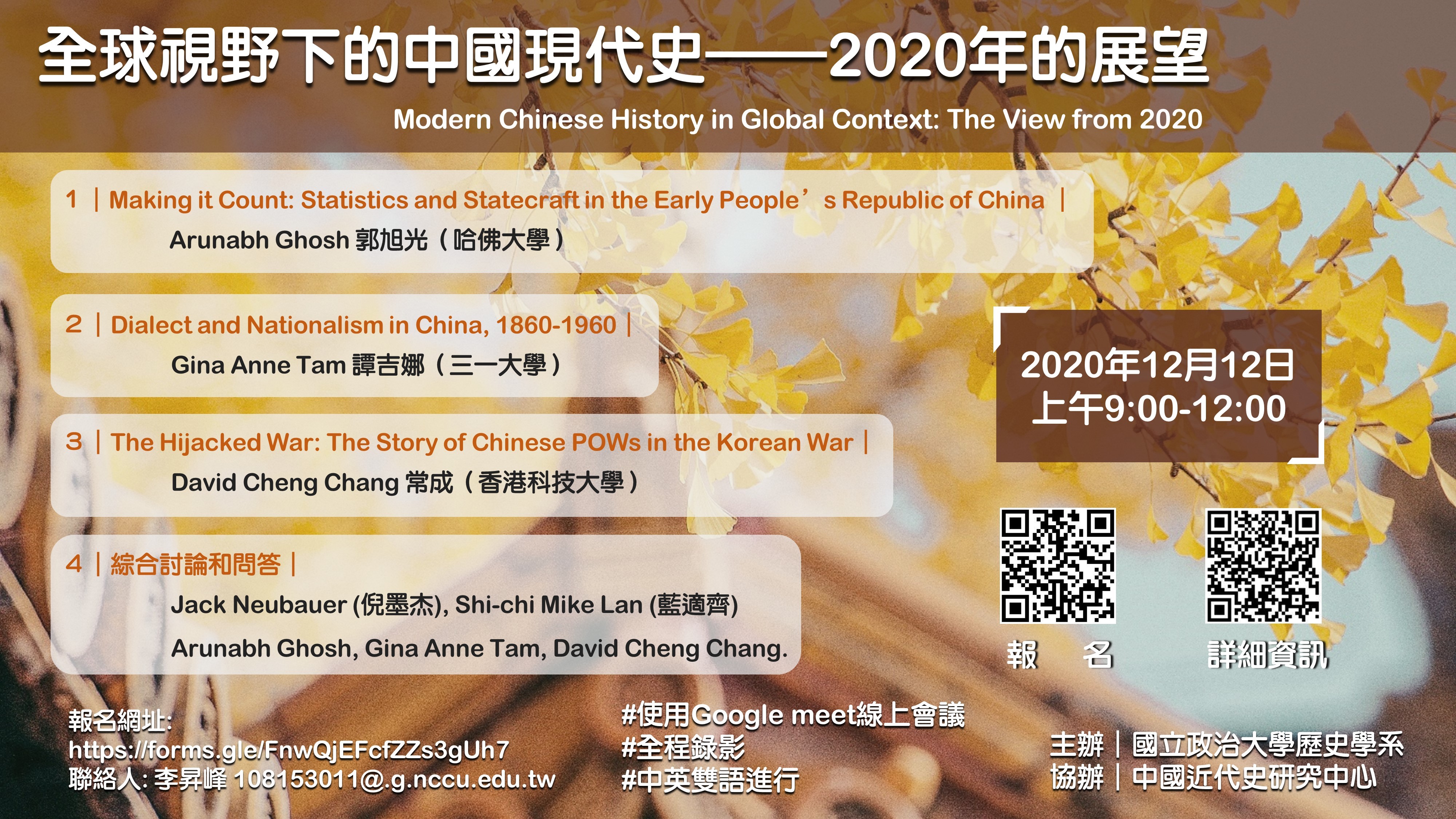 After this special year of 2020, what is the status of the study of modern Chinese history? How can the newly published research on modern Chinese history help us understand the role of China in the world order today? And how do historians respond to the turbulence and challenges that 2020 will bring to the world in different levels such as research, writing, and teaching? In order to discuss the above issues, this forum will invite three scholars who study modern Chinese history to tell about their newly published book. The final comprehensive discussion and Q&A will be chaired by Professor Jack Neubauer and attended by Professor Shi-chi Mike Lan. Three speakers will combine their research to share their views and prospects on China's current status quo and international relations in restructuring.

David Cheng Chang 常成 is Associate Professor of History at the Hong Kong University of Science and Technology. He received a PhD in Modern Chinese History from the University of California, San Diego. He was a visiting student at Academia Sinica's Modern History Institute in 2009–2011 and a visiting scholar at the Center for Chinese Studies in 2010. He studies the history of WWII interpreters, the Korean War, the Cold War, and US-China relations.  The Hijacked War: The Story of Chinese POWs in the Korean War is his first book.

Arunabh Ghosh 郭旭光 (BA Haverford; PhD Columbia) is a historian of twentieth century China with interests in social, economic, and environmental history, (transnational) histories of science and statecraft, and China-India history. He is currently an Associate Professor in the History Department at Harvard University. Ghosh’s first book, Making It Count: Statistics and Statecraft in the Early People's Republic of China (Princeton University Press, 2020), offers new perspectives on China’s transition to socialism in 1949 by investigating an elemental but hardly elementary question—how did the state build capacity to know the nation through numbers? He is currently working on two new projects: a history of small-scale dam-building in twentieth century China and a history of China-India scientific connections, ca. 1920s to 1980s. Ghosh’s work has appeared in the Journal of Asian Studies, Osiris, BJHS Themes, EASTS, PRC History Review, and other venues.

Jack Neubauer 倪墨杰 (PhD, Columbia University) is a Postdoctoral Fellow with the Schwarzman Scholars Program at Tsinghua University.  His research interests include Modern Chinese History, global history, humanitarianism, childhood and youth, and the history of U.S.-China relations.  His current book manuscript, Adopted by the World: China and the Post-WWII Global Humanitarian Order, analyzes the histories of international adoption and child sponsorship in China from the 1930s to the present to examine how the recipients of humanitarian aid in China shaped and challenged the global humanitarian order.  He has recently published an article titled “Adopting Revolution: The Chinese Communist Revolution and the Politics of Global Humanitarianism” in Modern China.  He will begin as an Assistant Professor in the Department of History at National Chengchi University in Spring 2021.

Gina Anne Tam 譚吉娜 is an assistant professor of Chinese history at Trinity University in San Antonio, Texas. Having received her Ph.D. from Stanford University in 2016, and her research and teaching focuses on the construction of collective identity-- national belonging, ethnicity and race-- in modern China. In addition to her book Dialect and Nationalism in China, 1860–1960, she has also published peer-reviewed work in Twentieth-Century China, and has written about the relevance of her work to current events in Foreign Affairs, The Nation, and Dissent. Her new project will be a global history of Chinese restauranteurs and the making of pan-Asian cuisine in the twentieth century.